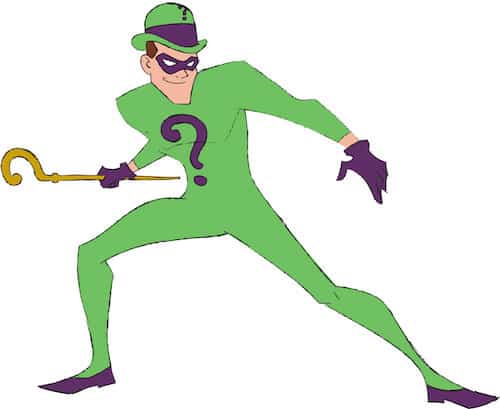 I woke up last night in a cold sweat. I had a terrible nightmare about being chased by a huge bus with a camera. No matter where I parked my chariot, the huge bus snapped pictures.

Several days later, I opened my mailbox and one, 200-pound parking ticket fell out with a thank you note from the Riddler. Boy, am I glad it was only a bad dream.

Can you be tossed in jail for paying a parking ticket?

You’ve got to watch this shocking parking ticket tale #2 about a Philadelphia lady spending a night in jail because she paid a parking ticket.

[Larry: I am sorry to report that this video is no longer available].

#3: Kudos to the Hudson Square Connection Business Improvement District for taking the initiative to unsnarl the daily traffic nightmare near the Holland Tunnel between 4 p.m. and 7 p.m.

The improvement district hired “Traffic Managers,” mainly retired police officers, from Sam Schwartz Engineering, and placed them along Varick Street at Houston, Charlton and Vandam Streets starting this past fall.

“Ellen Baer, president the Hudson Square Connection Business Improvement District, said that the streets improved immediately. On typical days between July and October, the number of blocked crosswalks dropped by 43 percent and the number of blocked intersections fell by 61 percent. The traffic officers were so effective that the district made the program permanent in February.” [via NY Times].

Can you imagine…buses snapping pictures of illegally parked cars along their routes, or being thrown in the Hoosegow because of a parking ticket? And I thought bus lane and red light cameras were bad.

It took the initiative of private citizens to ease the torturous daily pilgrimage to the Holland Tunnel while reducing the number of “Blocking the Box” parking tickets.

Who will prevail in the battle between the revenue-raising parking ticket warriors and the traffic managers granting safe passage home?

How’s your knowledge about crosswalks and stop lines? Ever get a ticket for stopping in a crosswalk? Simply click on this link and help is on the way.