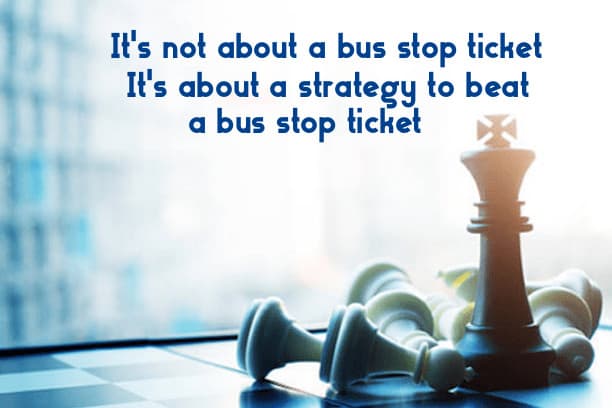 Can you beat this bus stop parking ticket?

Your client recently graduated from medical school. He attended an interview for a resident position at St. Barnabas Hospital in the Bronx. Dr. Doctor had a great interview. But, when he returned to his car he found an orange parking ticket under his wiper. Yikes! He was charged with parking in a bus stop zone. But, Dr. Doctor did not see a bus stop sign when he parked.

The place of occurrence entered on the parking ticket was in “front of 4422 Third Avenue in the Bronx. ” But, 4422 Third Avenue was the street address for the entire side of St. Barnabas Hospital, almost three city blocks long. Yikes! Yikes!

Dr. Doctor did not take any photos of his parking space but clearly remembers parking near the East 182 entrance much further up the block.

Can you beat this ticket for Dr. Doctor?

Here are some of your challenges:

-Your client’s story conflicts with the official records (DOT Parking Regulations Map shows a bus stop zone) Who is a judge going to believe?

-Your client says he didn’t park in the bus stop zone shown on the DOT Parking Regulations Map, but how are you going to prove it because the DOT Map showed a bus stop zone “in front of 4422 Third Avenue.” And, again, who is the judge going to believe when the official records show a bus stop zone right by the emergency room entrance to the hospital, in front of the place of occurrence entered on the bus stop ticket?

-Your client actually parked near theEast 182 Street entrance up the block, and not in a phantom, non-existent bus stop zone near the emergency room entrance by East 183 Street.

Are there too many “bad, incorrect” facts to explain away?

How to persuade the judge that the official DOT Parking Regulations Map was wrong AND the tiny blue bus stop icon was misplaced?

I searched Google Maps Street View to see if it concurred with the official DOT Map. Fortunately for the good guys, Google Maps had some convincing images that conflicted with the DOT Map. Google displayed a bus stop across the street from the place of occurrence (but the image of the bus stop across the street was not current and there was a tiny blue bus stop icon somewhat on the same side of the street as the place of occurrence).

I looked closer at the curb where the bus stop was supposed to be and found a curb cut. There shouldn’t be a curb cut in the middle of a bus stop zone inviting people to enter the roadway at a very dangerous location.

Although the Google images were not current, they weren’t that old either. I didn’t think a judge would believe that the bus stop was changed from across the street from the place of occurrence to in front of the place of occurrence in such a short period of time. Or, that there were two bus stops on the exact opposite sides of the street on Third Avenue. I believed the tiny bus stop icon was either misplaced or was in the middle of the street.

How to persuade the judge that Dr. Doctor parked near the entrance to the hospital by East 182 Street?

We won. The nasty ticket was dismissed!

I totally believed Dr. Doctor and thought he deserved a good fight to beat the evil bus stop ticket. Even though I didn’t think we had the best chance of winning, I thought we had a good chance to beat the ticket if our case was assigned to an open-minded judge.

This is why, especially with multi-issue, challenging cases you need to have a strategy. It isn’t sufficient to simply argue there wasn’t a bus stop where you parked You gotta offer persuasive evidence to overcome the unfavorable evidence against you.

In this case, I told the story of a young doctor trying to find a vacant parking space to attend his resident’s interview. My evidence was like a storyboard showing the route taken by the doctor who ended up near the entrance to the hospital where the human resources building was located.

A good story will capture the attention of a judge (or your 7-year old granddaughter!)