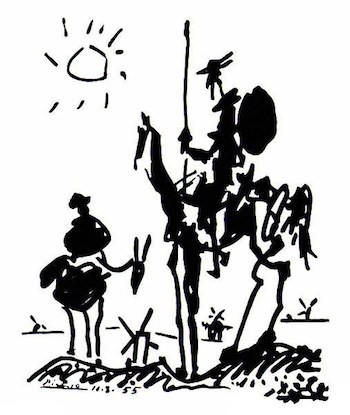 Is a Florida man “tilting at windmills” in his fight against an unjust NYC parking ticket?

Jeff Connors received a letter in the mail from the NYC Department of Finance advising him of an outstanding parking ticket for failure to display a muni-meter receipt. The $35 parking ticket was issued in a Queens parking lot. The problem was, neither Mr. Connors nor his trusty SUV Rocinante was ever in the parking lot, and Jeff hasn’t been to NYC in 10-12 years.

Mr. Connors “…decide[d] to sally forth as a knight-errant in search of adventure. He don[ed] an old suit of armour, [and] rename[d] himself “Don Quixote” [Wikipedia, “Don Quixote”].

Jeff kept a diary of his journey, and published it on a Facebook page he created to publicize The Evil Empire’s bad behavior.

The following are some excerpts from the WINK news broadcast:

“You just go through this endless loop of talking to support staff,” Cooner said. “I have been unable to talk to an actual employee of the City of New York that works for the Department of Finance.”

Some have suggested he just pay the 35 bucks and make it go away. But Jeff, a businessman, doesn’t see it that way. He wants to know how it happened. “My choices are to pay it or have a hearing and I am not going to have a hearing,” Cooner said. “All that does is create more information which shouldn’t have to be on their public record. If they go on record that it was our error, then I don’t have to worry about a counterfeit plate.”

Cooner worries he’s just one of many stuck in this same situation. So, he wrote a letter to the Commissioner of the Department of Finance, the Mayor, and other city leaders asking for help. He’s also taking his ticket troubles to Facebook, chronicling, day by day, this “David versus Goliath” story. “I am committed that this will go away,” Cooner said. “For me, this is just a project and I will see it through like any other project we do.”

Cooner wants three things out of all of this:

We contacted the Department of Finance about the issue. But, we’ve heard nothing back.”

So, what do you think about Jeff Connors’ strategy to eliminate this unjust NYC parking ticket? Too much or not enough?

Here’s my take…The mantra of New York Parking Ticket is, “When you’re right-Fight.” And Jeff is clearly, without question, right. Please allow me to share a story.

When I was a much younger guy, I visited an island in the Caribbean with my wife for a wonderful 7 days of fun. The island was known for its fabulous restaurants.

On the second night of our stay, we made a reservation at a restaurant that was supposed to be 15 minutes from our hotel. We got into our Kia, headed to the bottom of the hill, and turned left. Two and one-half hours later, we arrived at our destination. Totally shaken after circumnavigating the entire island, we stumbled into the restaurant at closing time. We shared our journey with the owner of the restaurant.

His first comment after we finished was, if you turned right at the bottom of the hill, we were only 15 minutes away and your journey was over.

I think Jeff may have turned left at the bottom of his hill.

One of the frustrating challenges people share with me is the parking ticket in the mail trick when they have never been to NYC. It is very difficult to prove a negative. I have railed against the short shrift that the Evil Empire gives to these “illegal” parking tickets.

In Jeff’s case, he wrote a letter to the NYC Department of Finance and challenged the parking ticket on a couple of omitted and misdescribed required elements:

The defenses Jeff raised and the proof he submitted entitled him to a dismissal of the parking ticket. My suggestion is that the Department of Finance review this letter, consider it an application for a dismissal, and dismiss the parking ticket. It wouldn’t hurt including in the decision that sometimes mistakes are made, and an apology for the inconvenience.

What’s do you think? Can’t wait to hear your thoughts.