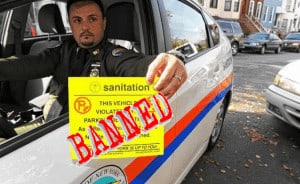 Council member David Greenfield of Brooklyn is sponsoring a Bill to ban those nasty, stinky   ASP stickers that punish tardy members of the NYC driving community for failing to move their car on street cleaning days. A sticker is glued on a car window as pay-back for blocking the path of a sweeper.

Sumathi Reddy wrote an excellent article on the subject that appeared in yesterday’s Wall Street Journal. It is worth the read (and not just because I was quoted in the article).

‘Twas brillig, and the slithy toves

Did gyre and gimble in the wabe;

All mimsy were the borogoves,

And the mome raths outgrabe.

“Beware the sanitation department sweepers with stickers my son

The jaws that stick, the claws that clean!

Greefield and the Transportation Commmittee took their vorpal swords in hand;

And stood awhile in thought.

And, as in uffish thought they stood,

The sanitation department sweeper with stickers, and eyes of flame,

Came whiffling through the NYC streets,

And rumbled as it came!

They left it dead, and with all the unstuck stickers

They went galumphing back.

“And hast thou slain the sanitation department sweeper

Come to my arms, my Transporation Committeee

He chortled in his joy.

‘Twas brillig, and the slithy toves

Did gyre and gimble in the wabe;

All mimsy were the borogoves,

And the mome raths outgrabe.

The NYC Council has the power to do the right thing and deep 6 those nasty ASP stickers. The NYC driving community is counting on you.

Would you prefer an NYC parking ticket, rather than a stinky ASP sticker?

Does anyone have a sticker shock story to share? Please do. We’d love to hear it from you.

[Many thanks to an honorary member of the NYC driving community, Lewis Carroll for writing the Jabberwocky]