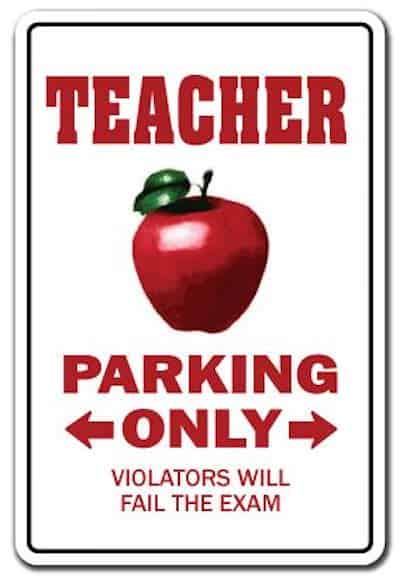 Is the system broken that allocates parking in NYC for teachers?

I received a distress call from a teacher lamenting the lack of sufficient on-street parking in NYC for teachers. He told me that his school was allocated 25 parking permits for a staff of 75 teachers. And, he opposed the unfair distribution of the placards by his school principal.

Can this parking conundrum be repaired?

Back to the future

Once upon a time, a long, long, time ago, Mayor Bloomberg ruled the land.  In 2008, there was more than 60,000 teacher parking placards in circulation. The problem was that there were only 10,033 on-street parking spaces around schools designated for teachers and other Education Department employees during school hours,  Mayor Bloomberg initiated a plan to cut the number of placards to equal the number of parking spaces, much to the chagrin of the teachers and their union.

“My biggest concern is I’m not sure how to do it equitably with my staff,” said Nick Marinacci, the principal of the Bronx Writing Academy, a middle school that shares a building on East 167th Street with another school. The building has 23 street spaces reserved for teachers, and Mr. Marinacci said he was told that he would be given 10 permits and that the rest would go to the other school. He said that he has 50 teachers and about 20 other staff members, and that about half the teachers regularly drive in.

In the past, with more permits than spaces, there was a race in the morning and the early arrivals got the parking spaces. Those who came later had to find parking elsewhere in the neighborhood.

He said that he was considering holding a lottery among his staff members to give out the permits and that he worried that the parking crunch would make it harder to attract good teachers. “What I think will end up happening is we’ve already got competition for teachers, and schools with parking lots will become even more desirable than they were before,” he said.

Resolutions to the rescue

In 2014, the teacher’s union issued the following resolution:

WHEREAS, New York City limited parking placards for city workers, including UFT members in 2008, and

WHEREAS, the stated intent of the change was to cut abuse of parking placards and to free up curbside spaces, and

WHEREAS, several agencies had placards which could be used anywhere and were sometimes used unnecessarily and

WHEREAS, teachers had a totally different kind of placard, only allowing access to spaces in front of schools during school hours, on a first come, first served basis (meaning the permit allowed the holder to park if he or she found a spot, not a guaranteed space) and

WHEREAS, unlike with other agencies, there were not major concerns about abuse of UFT/school parking, and

WHEREAS, the City forced a new agreement with the UFT anyway, changing the system from first come first served, to a system where much fewer had permits, outraging many of our members, and

WHEREAS, the City gained nothing tangible through this agreement, neither freeing up parking nor delivering any cost savings, and

WHEREAS, “preserving the number of spaces” did no good for those many members who lost their permits, but for schools, without sufficient designated parking there is already an appeals process in place, and

WHEREAS, through this agreement, Bloomberg was able to inconvenience thousands of teachers, consistent with his overall treatment of us, and

WHEREAS, Mayor de Blasio, Chancellor Fariña, and the new city administration have no interest in continuing to harass and inconvenience teachers and other UFT members, therefore, be it

RESOLVED, the United Federation of Teachers will work with the new administration to return to an equitable parking system, where spaces are not pre-allocated, and be it further

RESOLVED, the UFT will push to have this improvement in working conditions in place as soon as possible, and be it further

RESOLVED, the UFT will publicize the appeals process for additional spaces.

Whereas, Finding a parking spot in New York City is often very difficult and time-consuming; and

Whereas, According to the New York Times, in some neighborhoods parking is so scarce that 28 to 45 percent of drivers on the street are looking for a parking spot at any given time; and

Whereas, According to the New York University Furman Center for Real Estate and Urban Policy, approximately 27.4 percent of New Yorker’s commute to work by car; and

Whereas, According to the New York City Charter, the Department of Transportation (DOT) has the power to enforce laws, rules, and regulations concerning the parking of vehicles and the movement and conduct of vehicular and pedestrian traffic; and

Whereas, According to the New York City Charter, the DOT has the power to establish, determine, control, install and maintain signs for guiding, directing or otherwise regulating and controlling vehicular traffic in the streets; and

Whereas, Some school employees must travel to work by car because they live in a neighborhood that is underserved by public transportation or would face a commute that would take several hours; and

Whereas, Many Department of Education (DOE) schools have signage that restricts parking so that DOE employees may have a place to park near the school at which they are employed; and

Whereas, Private school employees who commute to work by car face the same difficulties in finding parking as their public school counterparts but do not have similar signage that limits parking so that they may find parking near the school at which they work; now, therefore, be it

Resolved, That the Council of the City of New York calls upon the New York City Department of Transportation to reserve parking near private schools for private school employees.

Here are some questions that occur to me (Larry B)

You may wish to check out this report in the NY Times about 50,000 new parking permits issued recently by our Mayor DeBlasio.