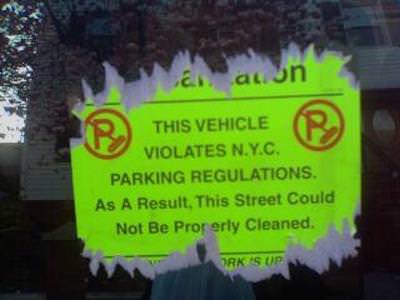 The NYC Council took one giant leap for “driving-kind” on Wednesday by passing a Bill prohibiting the sanitation department from plastering your car windows with their version of the scarlet letter (sanitation stickers) for blocking street cleaning trucks from completing their appointed rounds. Kudos to Council Member Greenfield (D-Brooklyn) for sponsoring this legislation and fighting for its passage.

There were two more Bills passed by the NYC Council on Wednesday:

Reactions from the City Council Speaker and Council Member Greenfield

City Council speaker, Catherine Quinn (D-Manhattan) had this to say:

“Ticketing is supposed to help us enforce the law — not unfairly punish people with no chance for swift recourse,” Quinn said, adding that she had the two-thirds vote to override any vetoes.”

“The stickers have no point other than to embarrass drivers, said the bill’s sponsor, David Greenfield (D-Brooklyn).

The measure will also save the city money, he added. City sanitation workers slap an average of 400 stickers on cars each day of alternate-side parking, he said.

“Their job is to keep streets clean — not deface cars,” he said. [via the NY Daily News].

Wednesday was a wonderful day for the NYC driving community. The NYC Council knocked three Bills out-of-the-park, in what I call, “parking ticket quality of life” legislation.

Making a mess of your car window to adding an exclamation point to a stiff parking fine is stupid, and a waste of sanitation worker time. I’ve yet to see any data showing that sticky stickers have any effect on the parking behavior they seek to extinguish.

It is draconian to force a member of the NYC driving community to spend his or her valuable time fighting an underserved NYC parking ticket issued for simply walking to or fro a Muni-Meter to pay money to the Evil Empire for the privilege of parking curbside. And, what is inconceivable to me is Mayor Bloomberg’s promise to veto this Bill. C’mon mayor…

This brings us to the third Bill…The “postponing the inevitable” Bill. All penalties are eliminated the moment a member of the NYC driving community beats a parking ticket. All penalties are collectible after fighting an NYC parking ticket and losing. So what if they are not technically  “imposed” until after losing? Can someone explain to me how this Bill benefits the driving public?

Anyway…These “quality of life” Bills are music to my ears. Thanks to the NYC Council for a wonderful concert.

Please share your valuable opinions about these Bills and Mayor Bloomberg’s veto. Your opinion is important to all of us.