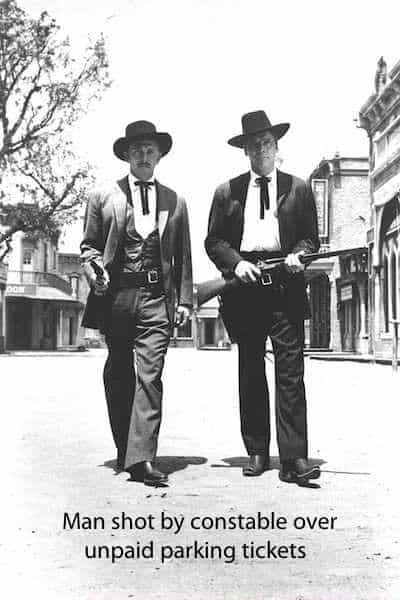 Why are you giving me a parking ticket?

Are you dumb? Are you stupid?

A cacophony of obnoxious insults was hurled from a third story window at a parking ticket warrior issuing a ticket. Dimitry was incensed that his girlfriend’s car was being pasted with an orange epistle courtesy of the Evil Empire.

About 20 minutes later, Dimitry left the building. The Warrior was waiting for Mr. Big Mouth with four men at her side. One of the warrior’s bodyguards flashed a six-shooter, while another attacker screamed, “what the f–k you said to my girl?

Are you ready to rumble? Well, there was no rumble, just a beat down of foul-mouthed Dimitry.

According to the Warrior, Dimitry threatened her from his window:

“He became a threat when he came out of the building and charged me.”

“I get cursed out every day.” She said. “I wouldn’t jeopardize my job to beat someone up. I’m a single mother of four.”

The parking ticket warrior denied knowing the attackers. She claimed a stranger intervened on her behalf when Dimitry lost his cool.

The other Dimitry totally denied the warrior’s account of the incident. He claims he left his apartment with a heart and mind as pure as the first winter snow and was ambushed by the warrior’s posse.

Dimity was positive he parked his girlfriend’s car in compliance with the ASP rules in effect that day. He did. But, sadly, the ticket was issued for an expired registration…Oops.

The NYPD and Internal Affairs are investigating the incident.

It is a high crime, and not a misdemeanor, to assault a parking ticket warrior while she is performing her duties. I urge you to put a lid on your outrage, and under no circumstances (except if you’re returning from a Muni-Meter with a paid receipt in hand within 5 minutes of the issuance of a parking ticket) engage a warrior in a conversation about the merits of your parking ticket.

On a lighter note, how’s your knowledge of crosswalks and stop lines? If you’d like to learn more, simply click the following link.

[Larry’s note: This story based on an article published in the NY Daily News].