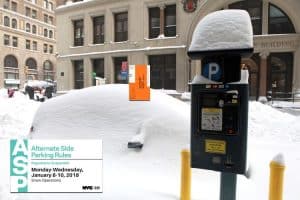 Warriors issued a bunch of parking tickets because muni-meters were not programmed to accept your money on days street cleaning rules were suspended due to snow.

In other words, you parked in a location that morphed from an illegal to a legal parking space because street cleaning rules were suspended for snow, but you were unable to pay for the time because the muni-meters didn’t take your money and issue a receipt, but you still got a parking ticket due to this programming glitch.

The Muni-Meters are programmed to reject payments when alternate side parking is in effect — even when that restriction has been lifted due to snow. On such days, a person can park in a metered space, be unable to pay the Muni-Meters and still receive a ticket.

“I had to bring this to light,” said City Councilman Chaim Deutsch (D-Brooklyn). “I thought traffic agents would know not to issue tickets during those times.”

Here’s an example of an addendum (green arrow) to the street cleaning sign on a gotcha pole that attempts to notify drivers that muni-meters don’t work during street cleaning hours. What do you think?

“We acknowledged that some tickets may have been wrongly issued, but there is no indication that this is a major problem,” said Finance Department spokeswoman Sonia Alleyne.

The city hasn’t figured out how many people may have been unfairly ticketed. The city suspended alternate-side parking 11 times due to snow from Jan. 2 to Jan. 18.

It’s difficult to estimate the number of tickets issued during that 90-minute time period on those specific days and areas.

Were you a victim?

The city suspended alternate-side parking 11 times due to snow from Jan. 2 to Jan. 18. Were you one of those drivers who parked legally, tried to pay for the time, but the muni-meter wouldn’t take your money? If you got a parking ticket between January 2, 2018, to January 18, 2018, because of this glitch, the DOT will give you a letter that will “toss the violation pending before the Evil Empire.”

[alert type=”info” icon-size=”hide-icon”]Problem is, I don’t understand how this process works. Do you?[/alert]

Has anyone tried to get their parking fine back? If so, please enlighten us on how this works?

Did you hear about last year’s shocking blunder by the Evil Empire? Check it out here.

[Larry’s comment: Did you know about this grace period?]

When the new signage has been posted, the Department of Sanitation provides a weeklong grace period during which its crews will clean streets according to the newly posted schedule, but will not issue summonses. At the conclusion of the grace period, enforcement of the new rules begins.