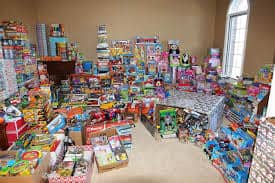 The City of Boston offers the driving public an alternative to paying a non-public safety parking tickets of donating a brand, spanking new toy accompanied by proof the price of the new toy equals or exceeds the amount of the parking violation fine.

“Toys for Tickets has been a hugely successful part of the city’s annual toy drive,” Mayor Thomas Menino said in a statement. “By offering those who have received a parking ticket a chance to give back to the community, we’ve created a positive experience for both the ticket payer and a Boston child in need this holiday season.”

The program began in 1993, and this year extended from Thursday, November 29, 2012, through Saturday, December 1, 2012. The program’s mission is to aid the city’s annual toy drive. During the 2011 holiday season, 119 parking tickets were resolved with toys that valued approximately $3,800 [via Charlestown Patch].

Did you know that…

“In a city of one million or more, the attaching or affixing by any means whatsoever of handbills or other forms of advertisements to a motor vehicle is hereby prohibited. In any prosecution for an alleged violation of this subparagraph, there shall be a rebuttable presumption that the person whose name, telephone number, or other identifying information appears on any handbill or other forms of advertisement attached or affixed to a motor vehicle shall be in violation of the provisions of this subparagraph [See, VTL Art. 9, Section 375 (ii)].

Can I cover my NY plate with glass or plastic?

“Number plates shall be kept clean and in a condition so as to be   easily readable and shall not  be  covered  by  glass  or  any  plastic   material,  and  shall  not  be  knowingly  covered  or  coated  with any   artificial or synthetic material or substance that conceals or  obscures   such  number plates or that distorts a recorded or photographic image of   such number plates, and the view of such  number  plates  shall  not  be   obstructed  by  any  part of the vehicle or by anything carried thereon,   except for a receiver-transmitter issued by  a  publicly  owned  tolling   facility  in  connection  with  electronic  toll  collection  when  such   receiver-transmitter  is affixed  to  the  exterior  of  a  vehicle  in   accordance with mounting instructions provided by the tolling facility [See, VTL Art. 14, Section 402(1)(b)].

“Ripley’s Believe it or Not”

“German authorities are giving parking violators in one city an unexpected break by issuing tickets without fines.

The tickets, put on carelessly parked cars in Potsdam, including a fine of 0 euros and the cheerful message “Glück gehabt!!!” (Lucky you!!!). The new approach is designed to admonish motorists without hitting them in the wallet.

‘The tickets serve as a warning to parking offenders,’ said Regina Thielemann, a city of Potsdam spokeswoman. ‘They’re issued when the driver isn’t around. So they’re given written notice when they’d ordinarily only get a verbal warning. Potsdam, the state capital of Brandenburg just outside Berlin, earned around 1.2 million euros from parking fines in 2011, she said. Around 120,000 parking fines were issued last year.’ “[Via “Optimist News”].

Would this work in NYC?

I love what Boston does with their toys for tots program and parking ticket donation and Potsdam with their notes to parking criminals. Do you think the notes serve to rehabilitate parking ticket recidivism? Nah…