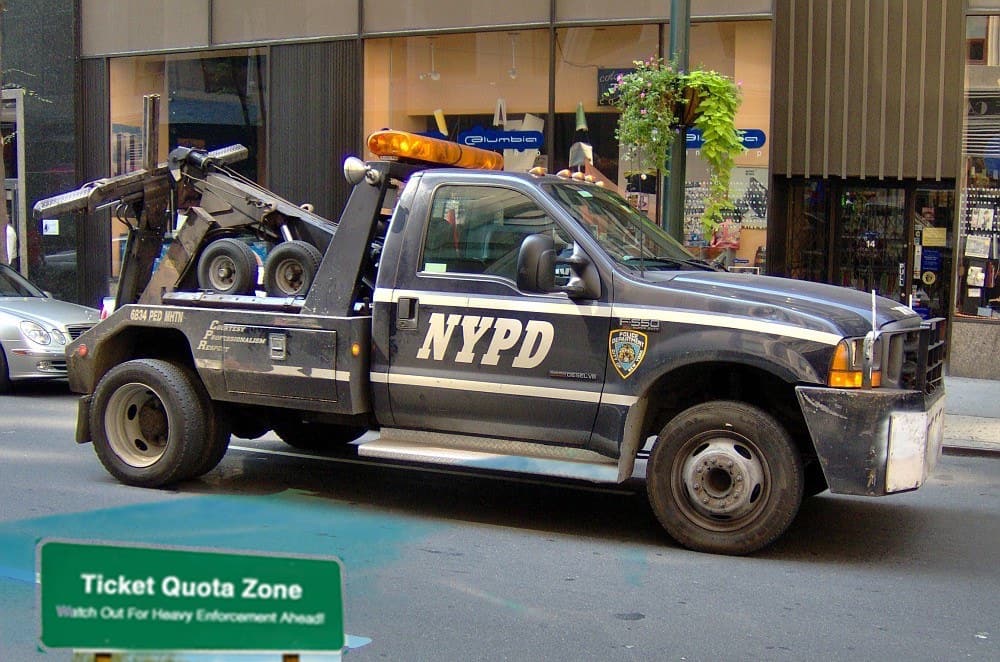 An article published in the NY Daily News last year about towing abuse in NYC by quota-minded police supervisors blew past me in a cloud of boots. However, with the holiday season approaching and Black Friday just around the corner, it’s a good time to keep an eye peeled for Captain Hook and General Boot.

Four agents and their union hit the city and the NYPD — which oversees the workers — with a lawsuit in November 2013 for issuing blistering punishments if they didn’t haul away three or four vehicles per shift. They claim their bosses would deny them overtime, shifts and meal breaks, and threaten poor evaluations and termination, according to papers filed in Manhattan Supreme Court.

‘Now, they don’t have discretion,’ Puleo said of his roughly 300 members charged with towing duties. “My members are being pressured to tow vehicles they normally wouldn’t tow in order to satisfy the agency.”

Approximately 750 cars are towed in NYC every day. Towing operations are projected to bring in $22.6 million each year, according to budget documents.

“It’s legitimate,” one police source said about the complaints of abuse

Eric Eichenholtz of the city Law Department said its “traffic-enforcement policies are appropriate and lawful.”

But one delivery company manager wasn’t surprised by what he called a “racket.”

“It doesn’t surprise me in the least,” said Steve Goolcharan, 48. “Our trucks are towed every day. It’s going to close my business.”

Here’s a link to the NY Daily News article

Towing a vehicle for parking violations, with a healthy dose of quota and strong arm revenue-raising-tactics, is a lethal mix. The punishers should be punished.

I never thought I’d be happy to see a boot, and not a vacant space where my car was parked.

Be wary of Captain Hook with the jaws that bit and claws that catch. Beware the jub jub warrior, and  frumious towing quota.

T’is the season to be jolly. Park safely.