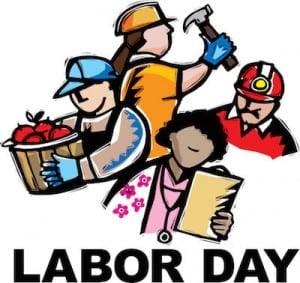 Labor Day is a major legal parking holiday in NYC

Labor Day is a major legal parking holiday in NYC, falling on the first Monday in September, and means:

Do you know the origin of Labor Day in these United States?

“In 1882, Matthew Maguire, a machinist, first proposed the holiday while serving as secretary of the CLU (Central Labor Union) of New York.  Others argue that it was first proposed by Peter J. McGuire of the American Federation of Labor in May 1882, after witnessing the annual labour festival held in Toronto, Canada.Oregon was the first state to make it a holiday on February 21, 1887. By the time it became a federal holiday in 1894, thirty states officially celebrated Labor Day.

Following the deaths of a number of workers at the hands of the U.S. military and U.S. Marshals during the Pullman Strike, the United States Congress unanimously voted to approve rush legislation that made Labor Day a national holiday; President Grover Cleveland signed it into law a mere six days after the end of the strike.

The September date originally chosen by the CLU of New York and observed by many of the nation’s trade unions for the past several years was selected rather than the more widespread International Workers’ Day because Cleveland was concerned that observance of the latter would be associated with the nascent Communist, Syndicalist and Anarchist movements that, though distinct from one another, had rallied to commemorate the Haymarket Affair in International Workers’ Day.  All U.S. states, the District of Columbia, and the territories have made it a statutory holiday.” [via Wikipedia]

Be safe and park safely.