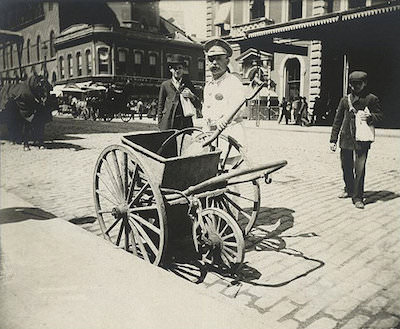 Mayor DeBlasio and his band of merry men and women notified the NYC Council on Monday that his honor opposed the Street Cleaning Bill recently re-introduced by Transportation Chairman, Ydanis Rodriguez. The street cleaning bill would enhance the quality of life for the NYC driving public that suffers the slings and arrows of street cleaning days in NYC. The proposed law provides in pertinent part:

No notice of violation shall be issued to a driver or owner of a motor vehicle on a day when alternate side parking rules are in effect if the driver or owner is in the vehicle and ready to move such vehicle when the street cleaning vehicle approaches or if the roadway under where such vehicle is parked has already been swept on such day.”

Does Mayor DeBlasio’s opposition surprise you?

The Daily News published the story

The law would loosen a New York rule that forbids parking for 90 minutes along a curb on the day a street sweeper is supposed to pass through by letting drivers return to parking spaces after the sweepers have passed. But the Sanitation Department says the change would make it harder to keep streets clean.”

People don’t like change. Mayor DeBlasio and the NYC Department of Sanitation are no exceptions. I was present and spoke at the Transportation and Sanitation Joint Committee hearings when this quality of life bill was originally introduced several years ago by then rookie Councilman Ydanis Rodriguez. One of the rulers of the Sanitation Department testified in opposition to the bill. However, I recall him admitting that the Sanitation Department was able to track the sweepers during their travels through the City streets. Now, the Department is claiming they cannot track these monsters.

It defies credibility that a battalion of stealth sweepers cruise the City without the Sanitation Department knowing where they are at all times.

[Tweet “Has the street sweeper ever returned to your neighborhood two or more times?”]

The argument that it would be more difficult to keep the streets clean, especially during autumn leave cleanup is, well, less than persuasive. So what if it is technically more difficult? How about the residents of NYC…Don’t they deserve consideration?  And, in real life, doesn’t the driving public sit patiently in their cars and wait for the sweepers to pass, anyway?

How many times during the autumn leave clean up has a sweeper returned to your neighborhood two or three times to get the job done?