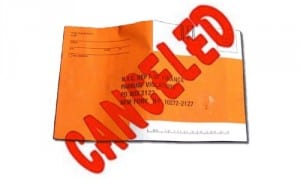 I laughed myself to sleep watching SNL when I was younger. I loved Jane Curtin and Dan Akroyd arguing the opposite sides of an issue in a recurring skit, Point, and Counterpoint.

Substitute Fox 5 News and the NY Post for Jane and Dan, debating the merits of a new Bill empowering a parking ticket warriors to cancel muni-meter tickets on the spot when a member of the driving public shows a paid muni-meter receipt.  This occurs when a driver is on her way back from a muni-meter with a paid receipt in hand, while a warrior is in the process of issuing a parking ticket.

Sorry, this video is no longer available.

“Let’s get ready to rumble!

A City Council proposal to ease parking violations would increase the number of physical confrontations between fine-wary motorists and ticketing agents, an NYPD inspector warned the council during a heated hearing yesterday.

Inspector Michael Pilecki, the commanding officer of traffic enforcement, urged the council not to pass a bill that would require agents to cancel parking tickets on the spot if motorists show a receipt from a muni-meter with a time stamp five minutes prior to the ticket or 10 minutes after.

‘There were 258 physical attacks on our traffic-enforcement agents in 2010, ranging from drivers slapping them and spitting on them to wresting their parking-ticket devices away from them, to serious assault causing significant injuries,’ Pilecki said.

The legislation, he said, ‘would exacerbate the potential for conflict between motorists and enforcement personnel by encouraging dialogue and argument about whether a driver is entitled to have his or her summons canceled on the spot.’

He also said agents are trained to check whether a driver is paying a muni-meter before issuing a ticket.’ “

I am sorry to say this Bill, sponsored by Council Member James Gennaro, may never see the light of day. It is currently “Laid over in Committee,” after a hearing earlier this week.

I am vehemently in favor of “Bravehearting” any lunatic fringe member of the driving public who assaults a parking ticket warrior. Although 258 assaults on warriors is 258 too many, it is a minuscule number considering 9 million parking tickets were issued last year.

Why not trust a warrior to do the right thing? I suggest it will significantly reduce the animosity against parking ticket warriors by empowering them to administer some street justice. If a member of the driving public paid for parking and can show a warrior the muni-meter receipt; the parking ticket should be canceled on the spot. “Justice delayed is justice denied.”

What do you think? Will this Bill garner the needed traction to become the law of the parking ticket land? Or, will it die in committee? Is this a good Bill, or will it endanger a warrior by allowing him to do the right thing and rip up the ticket?

Jane and Dan…What do you think?