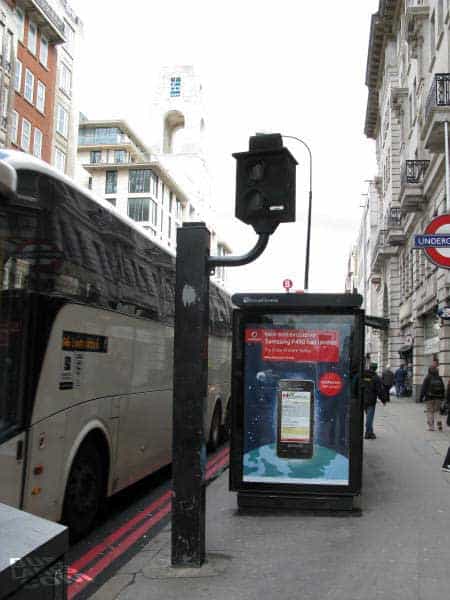 How the bus lane camera works

A taxicab driver or driver-for-hire straying into a bus lane in NYC, even momentarily, and caught by a bus lane camera will receive a $150 NYC parking ticket in the mail.

In Mayor Bloomberg’s ongoing battle with the NY State Legislature over the right to use bus lane cameras to issue summons to all vehicles, the Mayor settled for a smaller victory of issuing summons to taxicab drivers and drivers-for-hire.

In 2008, Mayor Michael Bloomberg lobbied for the enactment of legislation to permit NYC to use automated bus lane cameras to enforce bus lane encroachment violations for all vehicles. The ticket carried a fine of $115. This legislation was killed by the Assembly Transportation Committee and its chair, Rochester Assemblyman, David Gantt.

Not one to take defeat lightly, Mayor Bloomberg crafted a plan to bypass the State Legislature and use the power of the Taxi & limousine Commission (“TLC”) over the cab driver’s medallions to ensure that medallion owners pay the expensive bus lane photo citations

Bus lane cameras are installed on 34th Street between Park and Madison Avenue. This is the first of three that will be used for the six-month trial

How to beat a bus lane violation

Mayor Bloomberg intends to use the data compiled from the bus lane cameras to renew his battle to issue summons for bus lane violations to all vehicles. The Mayor’s argument is that enforcement of bus lane violations will improve traffic congestion and improve the mobility of public transportation, especially in Midtown Manhattan.

The use of a camera to enforce bus lane violations originated across the pond, in London. It was the brainstorm of the Mayor of London, Ken Livingstone; which along with a congestion tax resulted in increased ticket revenue in a relatively short period of time of $65M. Mayor Livingstone lost his bid for re-election by a 6 point margin.