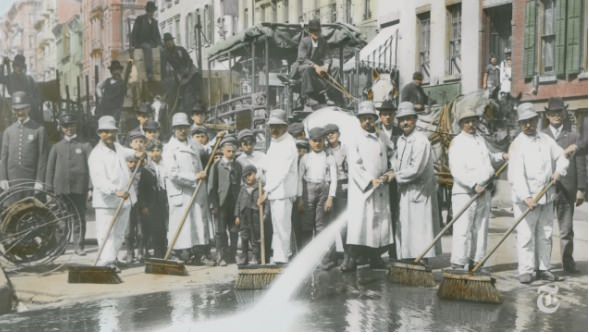 All the news fit to print about NYC parking tickets

The slogan, “All the news fit to print” resonates with me. I continually search the Internet for parking ticket news that our wonderful readers will find helpful, educational, or simply provide a giggle or two.

In 1897, Adolph S. Ochs, the owner of The New York Times, created the famous slogan “All the News That’s Fit to Print,” which still appears on the masthead of the newspaper today. He wrote the slogan as a declaration of the newspaper’s intention to report the news impartially.

What’s in your piggy bank?

Quarters were my favorite coins to put in our piggy bank. One Quarter was like having 25 separate pennies, but easier to spend.

Charlie (the owner of the Elmwood Avenue Sweet Shop) scowled when I paid for my stuff with pennies. He preferred quarters, too.

Here’s a guy Charlie would love… a NY parking meter cop who stole 356,000 quarters over a five-year period.

What does NYC do with all its garbage?

It’s my guess that every member of the NYC driving public has received at least one NYC parking ticket for a street cleaning violation. A small price to pay for clean streets.

But what about the ubiquitous sanitation trucks removing thousand’s of tons of garbage every day from city streets. There is an amazing story to be told about the legion of trucks, and the sanitation solders who operate them

Here’s an informative and entertaining video from the NY Times. Check out the uniforms on the initial battalion of sanitation solders.

The parking ticket immunity gang from the United Nations

What’s your first reaction when you hear the phrase, “diplomatic immunity?”

I can’t shake the line in “Lethal Weapon 2” where the evil diplomat from South Africa says to the good guys, “My good man, you could not even give me a parking ticket.”

There have been a spate of publicity about the huge amount of money a number of diplomats owe the Evil Empire. Here are some factoids:

Kudos to the amazing men and woman who work in the NYC Department of Sanitation for their tireless work to fight a never-ending battle to maintain the health and safety of New York City.