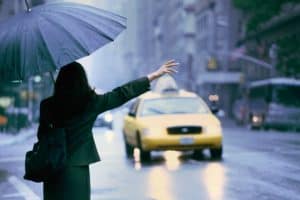 A Street hail summons has a chilling effect on a livery driver.

Has this happened to you? It’s raining cats and dogs on a dreary night in one of the outer boroughs of NYC. You didn’t expect the torrential downpour. After 15 minutes trying to hail a meter taxi cab, you are soaking wet. Not even one empty taxi cab passed you on the street, only livery cabs.

The TLC has significantly increased the number of street hail summons. Over the past several months, the TLC has stepped up enforcement of the anti-street hail laws. “Some 256 were drivers ticketed in February, a figure that quadrupled to 1,178 in March”

“The move comes on the heels of a city announcement that the Taxi and Limousine Commission (TLC) wants to create a new fleet of approximately 6,000 metered cabs that could pick up street hails in the outer boroughs and upper Manhattan.”

Would you like to know the best place to hail a cab? Gently click on this link to find out.

Is there too much noise in NYC? Honk if you agree.