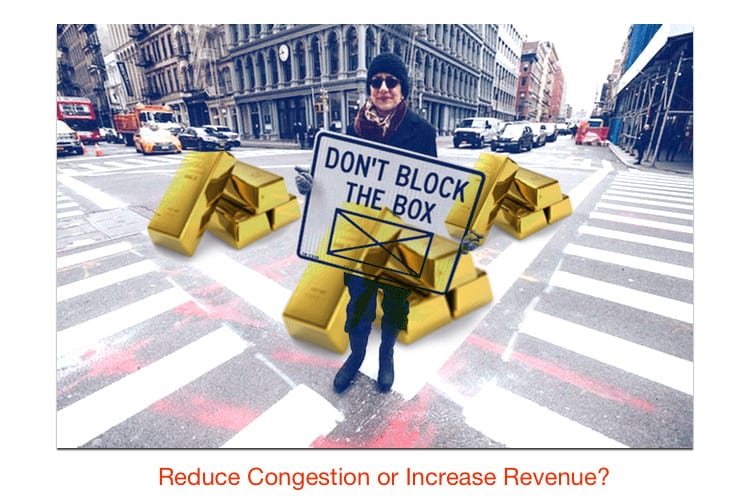 In an effort to meaningfully cut down on traffic congestion, Mayor DeBlasio initiated a program called, “Clear Intersections.” His strategy is to boost enforcement of blocking the box tickets, and:

All in the name of reducing congestion

Will the mayor’s efforts bear fruit or simply more revenue?

Here’s a wonderful interactive map of the fifty intersections

The blocking the box parking violation

What the Rule means

When a car is stopped at the intersection for a red light and the traffic light changes to green or when a driver reaches an intersection and the light is already green, if traffic is 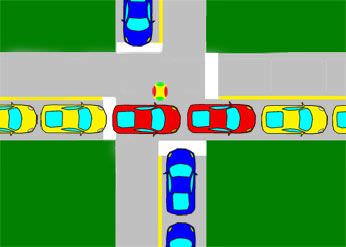 This poses a major challenge to drivers at busy intersections in NYC. How many of us have stopped at an intersection on a green light because there wasn’t enough room for our car on the opposite side of a congested box only to hear the blare of horns behind us shouting, “move or else!” Yikes!

[Larry’s comment: The red cars in the above diagram are blocking the box]

How to beat a blocking the box ticket

Here’s a FREE E-book that will help you beat a blocking the box ticket.

A new sign, painting a big “X” in the box, adding more cops or warriors at fifty intersections, and handing out more tickets will never, ever solve the congestion problem. Period. End of story.

The solution is having more cops and warriors directing traffic at the intersection, rather than handing out tickets when the light turns red. Therein lies the cure.

To go or not to go is a tough decision to make at 5P at a chaotic NYC intersection with horns blaring when you dare to stop your car on a green light. On the other hand, when there is a cop or warrior directing traffic, the decision is made by a traffic enforcement official who most of us are wired to obey.

Instead, I hear stories of warriors standing on the opposite sidewalk or hiding under a hotdog truck watching the chaos unfold in the intersection. When the light turns red, they spring into action and issue as many $115 blocking the box tickets as possible to drivers who chose not to run down pedestrians who started crossing the street before the light changed. Nice.

Mayor DeBlasio, if you really want to defeat congestion and not just add revenue to the city treasury, authorize the cops and warriors to direct traffic at the intersection