Have crosswalks and stop lines ever ambushed you?

What is it about crosswalks and stop lines? Why is this combination of roadway markings so costly and confusing? Above all, if you guess wrong, it will cost you $115.

Meanwhile, roadway markings have the power to:

(i) Marked crosswalk. That part of a roadway is defined by two parallel lines or highlighted by a pattern of lines (perpendicular, parallel or diagonal, used either separately or in combination) that should guide pedestrians into proper crossing paths.

Can you tell the difference between the road markings in the four tabs below?

What is a stop line?

A stop line is a single white line painted across the travel lane that signals where to stop your car before reaching a crosswalk.  It creates a buffer zone between the stop line and crosswalk so pedestrians can safely cross the street.

“The stop lines (or bar) only apply to moving vehicles and do not define a crosswalk.” Transit Sam at Downtown Express.

The stop line in the image in the prior tab was correctly painted because it did not extend from curb to curb. A stop line should only be painted across the traffic lane.

Is the white SUV below parked in the crosswalk?

Close call. If any part of the car breaks the plane of the marked crosswalk, the driver is toast. What do you think? Would you risk parking like this?

Are both cars in the image below parked legally?

Yesiree! The white car parked safely in the buffer zone without touching the crosswalk line—the blue car parked on the stop line, was perfectly legal.

Can a bike lane be located in front of a stop line?

Is the vehicle below parked in an unmarked crosswalk?

Check out this parking job.

I urge you to master the meaning of road markings, or you will be hit with costly parking tickets. Remember: 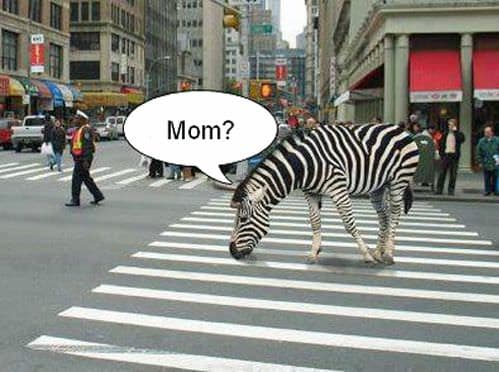 What Everybody Ought to Know about these Weird NYC Crosswalks
Would you blunder and unwittingly park in these weird crosswalks? If so, the cost is a $115 parking ticket. How to avoid these traps inside.

My lucky number is #7 (it started with Mickey Mantle). What’s yours? Meanwhile, here’s a guide with Larry’s 7 greatest tips to help you park safely and avoid those nasty NYC parking tickets.

Click on the pretty button below and the guide is yours. I hope these 7 tips are lucky for you, too.

Lucky 7 Tips are yours!