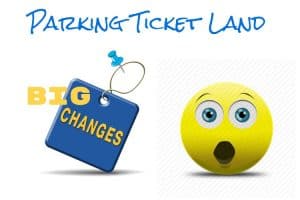 Parking Ticket Land has undergone some remarkable changes in 2018

The Evil Empire has undertaken three mind-blowing changes in Parking Ticket Land. They have:

What do these changes mean to you and your company?

Let’s play a word association game. I’ll pick a word and you say what immediately pops into your mind. Ready?

What words flew into your brain for “parking ticket advocate?”

-My first thoughts were, “give him a chance.”

The NY Patch had this to say:

The Department of Finance says it recently hired a “parking summons advocate” to help cranky drivers’ with complaints and other issues.

The new ambassador, Jean Wesh, will act as a liaison between the public and the department, which collects and processes parking fines, spokeswoman Sonia Alleyne said.

The department created the position to address “systemic” problems in the process of paying or fighting the dreaded tickets.

Wesh, the former managing attorney in the city’s Office of Administrative Trials and Hearings will earn $120,000 in the post.

Wesh is currently running a pilot program out of the Department of Finance business centers in Queens and the Bronx. He’s also been tasked with educating New Yorkers about policies and procedures relating to parking summonses.

The new office, first reported by the New York Post, is part of the department’s recent effort to improve customer service, Alleyne said. The city has also developed an app that lets drivers pay or dispute a ticket on their cellphones.

The Evil Empire supplied 3 Parking Ticket Untouchables with the money, resources, and mission to bring NYC’s biggest scofflaws to justice. 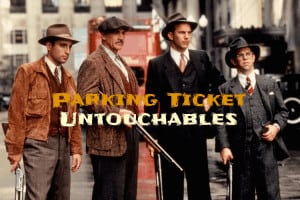 Here are some numbers:

You may wish to check out this superb article in Crain’s for more intriguing details and what scofflaws have to look forward to in the future.

The Evil Empire increased parking fines by reducing the amount of the discounts granted to commercial vehicles enrolled in the Commercial Settlement Programs. For example, a muni-meter fine of $45 was reduced to $0 for members of the stipulated fine program. Now, the reduction will be less (I’m not sure yet how much less).

The Evil Empire hopes this will provide greater incentive for commercial vehicles to park legally, reduce congestion, and raise a little more revenue (about $17M).

Here’s an omniscient article by Meaghan Fitzpatrick making the case for eliminating the discounts offered to commercial vehicles.

Yikes. A bunch of stuff to contemplate.

I think creating a parking ticket advocate is a wonderful idea. I hope we all give Jean Wesh, Esquire a chance to make a difference in our driving lives.  I’ll keep an eye out for Mr. Wesh and ask any of great friends to share their experience with Mr. Wesh.

My thoughts about the Untouchables is that they should exercise discretion on who to target. Spend your limited resources and investigators on the big, corrupt, fish first. Doing bad things is wrong, but wiping out a small business with fines and penalties should not be your first priority.

Guess who’s going to pay for the increased fines for commercial vehicles? You got that right!.