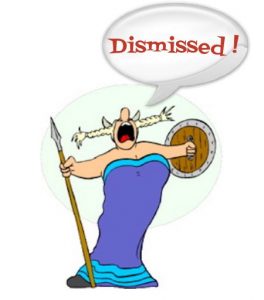 Serving NYC parking tickets by mail is not allowed. The NYC PVB picked a fight with the wrong member of the NYC driving public. Mr. Ko received a letter in the mail from our friendly NYC DOF stating that on such and such a date, and such and such a locale, Mr. Ko committed the parking ticket crime of double parking.

I gather from reading the court’s decision, by the time Mr. Ko received this epistle in the mail from the DOF, his NYC parking ticket had lapsed into judgment. The base fine of $115 and penalties in the sum of $60 were assessed, bringing the bill to $175.00. Please pay at the window on your right…Wrong.

Mr. Ko’s reaction was, no way DOF. It is not permissible under any of the myriad parking ticket laws to serve a parking ticket by mail. A parking ticket warrior is required to either, hand the parking ticket to the operator (English translation=driver) of the vehicle; or place it under the windshield wiper.

Mr. Ko filed a Request for a Hearing after Judgment with the DOF, requesting the default judgment be vacated, and his parking ticket dismissed. The judge agreed there was excusable neglect, vacated the default judgment, and vacated the $60.00 in penalties. The big but is, the judge found Mr. Ko guilty and ordered him to pay the original base fine of $115.

Mr. Ko said No, and filed an appeal. The Appeals Panel affirmed the decision of the original judge. End of story? Nope.

If you disagree with the final decision of an administrative agency, the next, expensive, very time-consuming, step is to file an Article 78 Petition with the NY State Supreme Court. Mr. Ko argued the PVB lacked personal jurisdiction to enforce the parking ticket because he was not personally served pursuant to the parking rules. In other words, there is no provision in any of the parking rules for service by mail.

The PVB wisely decided, under the theory of “know when to fold ’em” to offer Mr. Ko a settlement. The PVB in a rare kumbaya moment said, hey, we’re just kidding about all of this, we’ll dismiss your ticket.  Mr. Ko said no. This issue is very important to the driving public. I want a trial so the court can make a decision on the merits.

The PVB doesn’t take no for an answer. So, the attorney for the PVB by her lonesome (ex-parte) appeared before one administrative law judge, instead of the usual three (3) judge appeals panel, and made an application to dismiss the parking ticket (against the express wishes of Mr. Ko). The application was granted by the single judge, and Mr. Ko’s parking ticket was “officially dismissed.”

It ain’t over until the NY Supreme Court Judge sings

…And sing she did. But, not a happy tune for the DOF. Judge Schlesinger ruled in favor of Mr. Ko. The court held:

This is one of those rare moments when bright light is shined on the bad behavior of the PVB and DOF. Let’s tip our hat to Mr. Ko, who put his valuable time and money where his principles are!

This is an amazing moment in NYC parking ticket history. The big but is, there is no way the PVB is going to appeal this wonderful decision. Since it is a Supreme Court decision, and not an Appellate Division decision, it does not carry the weight of “precedent.”

Notwithstanding the absence of stare decisis, it is a day of triumph for the driving public. The PVB and DOF behaved badly. It is a major no-no for a lawyer to make an ex parte application to any hearing tribunal without the presence of the other party. What arrogance!

I am not recommending your ever intentionally drive off when you think you’re about to receive a parking ticket. But, I’m hoping this decision has a chilling effect on the evil warriors who issue parking tickets without a car because they think they can get away with this bad behavior.

The driving public is required to play by the parking rules. So does the PVB. Please share your thoughts about the impact of this decision. How will you handle a letter in the mail from the DOF? We owe our great friend Thomas H a hearty round of applause for giving me a “heads up” about this recent decision.