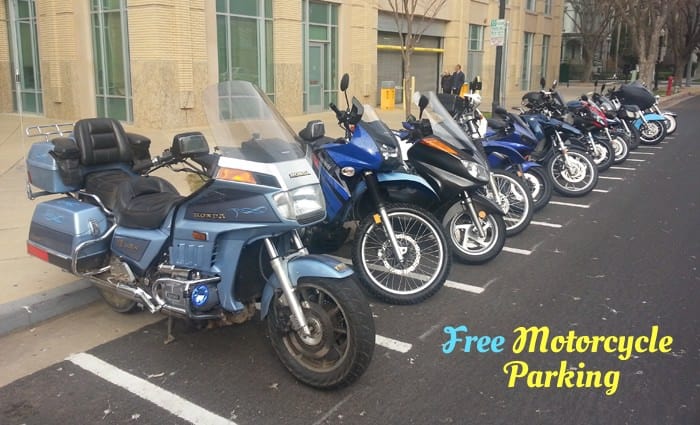 “There is no way for a motorcycle rider to affix a muni-meter (receipt) to their bike in a way that it won’t blow away and it won’t be stolen,” Vallone said.

DenDekker, a fellow motorcyclist, said after 34 years of riding he received his first $65 parking fine last week, due to what he sees as a faulty system.

“I received a ticket for failure to display a muni-meter receipt,” he said. “I did not buy one because I didn’t have any place to put it. There’s no place on my motorcycle that I can attach this little piece of paper” [via NY Daily News].

In an excellent rebuke of the proposed FREE biker parking legislation, Streetsblog published an article, with the following headline

Reporter Brad Aaron went on to write in this article:

“It’s hard to say what’s most off-putting about the campaign by Peter Vallone Jr. and Michael DenDekker to grant free parking to motorcyclist — including themselves — in New York City. There is, of course, the brazen and unapologetic conflict of interest in introducing legislation for one’s personal benefit.

Then there’s the fact that no one needs to see an elected in a leather vest.

And the irony. Pop mythology has it those motorcycle riders are tough guys — rugged individualists if you will. Yet to hear Vallone and DenDekker tell it, they and their boys are helpless against the muni-meter receipt, which they can’t figure out how to attach to their Hogs.

“We get tickets a lot,” Vallone said at a motorcycle rally, of sorts, at Queens Borough Hall on Thursday. ‘That is unfair.’ “

“The department noted that it provided parking instructions on its Web site, which recommend that motorcyclist purchase clear plastic cases to hold their meter receipts.

Mr. DenDekker said these instructions were insufficient because they did not detail where to find the holders or how to use them. “Either way, they got my $65,” he said.

He pointed out that before the city began using Muni-Meters — and their vexing receipts — motorcycle parking was far simpler. “We put a quarter in like everybody else,” he said. “Nobody ever bothered me” [via NY Times].

Me, too! I am proposing legislation that Larry parks for free in NYC. Are you with me?