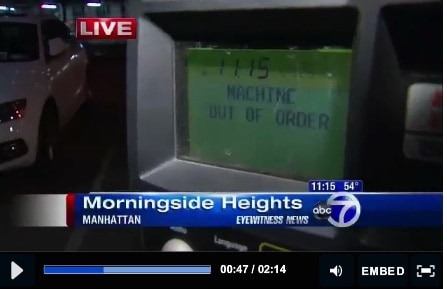 Joe called the other day because he lost his NYC parking ticket battle against a broken muni-meter, and wanted to hire New York Parking Ticket LLC to appeal his upsetting loss. I asked Joe to summarize his defense. Joe replied (and I paraphrase):

I tried to explain to Joe that he was allowed to park at a broken muni- meter but was required to check all the muni- meters on the block (both sides of the street from corner to corner), and to call 311 to report the broken muni- meter. Joe was dumbfounded. He rejected the idea that it was necessary to try to find a working muni- meter on the block, and felt that his photograph of the flashing red light was sufficient to win. Unfortunately, Joe rejected the rules, and the Evil Empire rejected Joe’s defense.

It is not enough to fight when you’re right. You must present the proper proof properly to emerge victoriously. For example, you are permitted to park at a broken mechanical meter as long as you call 311. The Evil Empire will send out a meter repair crew that will enter the broken meter data in the Evil Empire’s secret data base.

How about parking at a broken muni- meter?

It is permissible to park at a broken muni- meter, but you absolutely must:

When you fight a parking ticket for a broken muni- meter, don’t forget to assert in your defense certification that you did, in fact, check the entire block for a muni- meter that worked, and there was none.

Joe got angry at the messenger (Larry) because Joe rejected the procedure he was required to follow to beat a broken muni- meter parking ticket, and disagreed with the judge’s decision (especially since the judge claimed the flashing lights on the muni- meter was not visible in Joe’s perfect picture. Joe gets my vote for libertarian of the year! But, believe me, Joe is not alone in his muni- meter rage.

I urge our wonderful members of the driving public to do their homework before summiting a defense to a parking ticket based on common sense, or one they feel is intuitively fair. Every one of the approximately 99 parking violations has a specific defense, and the parking ticket judges look for the proper proof to establish the defense. Knowledge is power…You will go down in a blaze of orange if you don’t take the time to acquire knowledge to fight your parking ticket before sending in the troops.

P.S. Only 17% of all appeals are reversed. The second bite of the apple doesn’t usually taste very good.