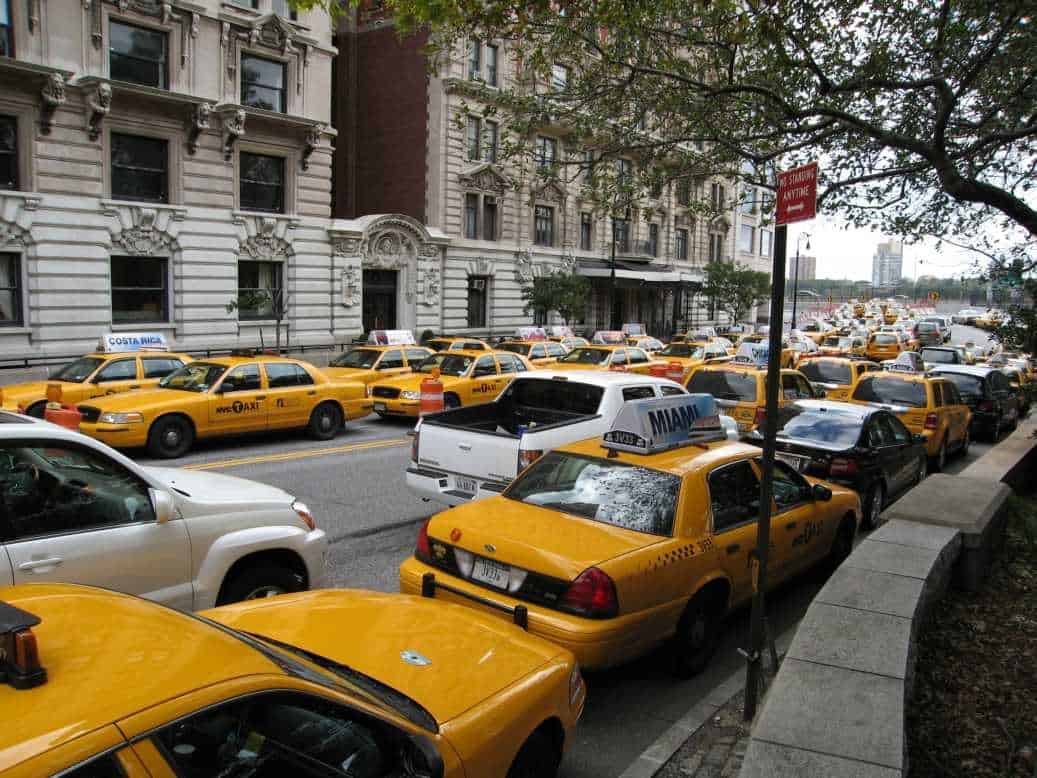 All the NYC parking ticket news fit to print

People (like you and me) are fascinated by stories about NYC parking tickets. For example:

No contest…NYC parking rules win by a landslide.

The NY Post reported that the men-in-blue feasted on a long line of cabs that were double parked in front of their mosque on Ramadan. Here are the competing stories:

This is a special prayer time, a time for religion. We double-park here every Friday and they [allow it], but today they gave us all tickets, almost 100 cabs,” he said. Zaman, who has been attending services at the mosque for nine years, was slapped with a dreaded orange envelope that held a $115 greeting for double parking.

Driver MD Shomuz, who has been going to the mosque for six years, said, ‘No one has been given tickets before, but today ­everyone got one.’ It’s frustrating, but what can I do?’ he said.

An NYPD spokesman said that while individual precincts may make accommodations in extenuating circumstances, such as the Ramadan observation, double parking is never authorized, citing, for example, the need for emergency vehicles to navigate the roads. A source at the 20th Precinct, which covers the mosque, said he wasn’t aware of an organized ticket blitz. He added that cops at the precinct have a good relationship with the mosque.”

The reaction of the cabbies is similar to the reactions I get from angry members of the driving public who get double parking tickets  while parking on the unrestricted side of the street during street cleaning. Do the cabbies have a legitimate gripe when double parking has been permitted for six years without incident? Or, can a parking rule be enforced once every six years?

Double parking and the presumption of negligence

Generally, a presumption of negligence attached to a driver that strikes another vehicle in the rear. However, there is an exception to the rule when a car is double parked.

In a ruling issued this month, a judge in State Supreme Court in Manhattan found that ‘double-parking is the only exception to the rule’ found in previous case-law ‘that the stopped front car is presumed not negligent.’

Justice Arlene P. Bluth wrote that in almost all cases, if a driver hits another vehicle from behind, that driver could be found negligent without a trial. But when the victim is double-parked, the matter is best left for a jury to decide.

‘If plaintiff was moving and stopped suddenly because, say, she thought a child was about to dart out, or because she thought the architecture was interesting, or because a bee flew into her car and frightened her, then she would be entitled to summary judgment if defendant rear-ended her, because the defendant should have left enough room between the cars to stop in time,’ she wrote.

‘But if she was already stopped and double-parked,’ the judge wrote, ‘being hit from the rear may be a reasonably foreseeable consequence of double parking on a busy Manhattan street, and the determination of negligence must be left to a jury.’ ” [Source: NY Times]

Make sense? Do you agree?

Will we ever see red?

Legislation is pending in the NYC Council that mandates the curbs be painted red to alert the driving public where they cannot park. Here’s the proposed legislation:

By Council Members Gentile, Williams, Koo, Lancman, Constantinides and Ulrich
A Local Law to amend the administrative code of the city of New York, in relation to the curbs adjacent to a fire hydrant or bus stop.
Be it enacted by the Council as follows:
Section 1. Title 19 of the administrative code of the city of New York is amended by adding a new section 19-175.4 as follows:
§ 19-175.4 Curbs adjacent to fire hydrants and bus stops.  a. Notwithstanding any other law, rule or regulation, any curb adjacent to a fire hydrant located on a public sidewalk or a bus stop shall be painted the color red. Such curb shall be painted the distance by which a motor vehicle is prohibited from stopping, standing or parking on either side of a fire hydrant or bus stop. For purposes of this section, the term “bus stop” shall mean a location designated by signage for vehicles under the jurisdiction of the metropolitan transit authority to pick up or discharge passengers.
§ 2. This local law shall take effect 90 days after its enactment into law.”

Will this law ever see the light of day?

No city for dead men

Should the family of Mamadou Barry be responsible for two parking tickets issued after his death?

Mr. Barty died in the front seat of his car while it was parked illegally. He was issued two parking tickets before someone noticed that this poor man had passed away.

The car was eventually found in a zone banning parking from 11:30 am through 1 pm with two parking tickets, one inside dated for June 23 and another on the windshield. The day police were finally called, wardens had ticked both the car in front and behind of Berry’s but not his vehicle. So there’s how to not get a parking ticket in New York City, already have two and be very, obviously dead in the front seat.”

Is death a defense to an NYC parking ticket?

Missing comma is a defense to an Ohio parking ticket

Here’s a story for people who think NYC corners the market on weird parking ticket stories. Would you dismiss this parking ticket for lack of a comma in the rule?

An appeals court has agreed with an Ohio woman who said her parking citation should be tossed because the village law was missing a comma. Andrea Cammelleri says she shouldn’t have been issued a citation in 2014 based on the wording of the law enacted by the village of West Jefferson. The law lists several types of vehicles that can’t be parked longer than 24 hours, including a ‘motor vehicle camper,’ with the comma missing between ‘vehicle’ and ‘camper.’

Cammelleri said her pickup truck did not fit that definition.

The village says the law’s meaning was clear in context, but Judge Robert Hendrickson of the 12th Ohio District Court of Appeals says in last week’s ruling that West Jefferson should amend the law if it wants it read differently.”

There is a minority view (Larry B, that’s me, included) that argue that double parking is a no standing violation and therefore it is legal to double park while stopping temporarily to drop off or pick up people, and skedaddle. With that said, I recommend that you do not double park unless absolutely necessary. And, only to stop, drop or pick up and go.

If you double park, you’ll likely receive a $115 NYC parking ticket. You’ll fight the parking ticket and hope that you present the proper proof properly to persuade the Evil Empire that double parking is legal.

May the Force be wit chu.