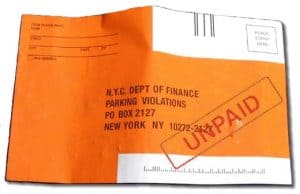 Over $1M. This is not a misprint, mistake, or a statistic from a fantasy parking tickets league. As many as 200 undercover police cars owe this bundle of bucks to the NYC Department of Finance. Many unmarked police cars:

Reaction by the NYPD to this sorry state of affairs

“The whole thing is insane,” one law enforcement official said. “This is one city agency wanting to collect money from another city agency, but everyone is under the same financial umbrella.

“It’s a debacle,” the official said.

Crack-down by the Bloomberg Administration

This debacle was unearthed as a by-product of a crack-down against motorists who were abusing parking placard privileges in a congested, downtown Manhattan in 2008.

“At the time, City Hall quickly realized an astonishing 150,000 placards had been issued to 68 government agencies and the Board of Education.  The mayor ordered that number slashed by at least 20 percent. And he also demanded the city root out abusers who were parking at bus stops, fire hydrants, and crosswalks which, of course, included the police, who were major offenders.”

The NYPD was placed in charge of the investigation and began looking internally for abuses. The NYPD learned it was operating with an astonishing 49,876 placards, which represents roughly one parking placard per NYC police officer.

It is hard to believe that a little, orange, epistle can create such havoc. Think about the implications…The ongoing Bronx parking ticket scandal where officers assassinate parking tickets and traffic tickets for friends, relatives, acquaintances; everyone except you and me. And now we learn that undercover police officers operate as if they have “diplomatic” immunity” from parking and traffic rules; and disregard these laws with impunity.

This is a very sad state of affairs.

Read more of this super article by Murray Weiss, an investigative journalist for DNA.info.