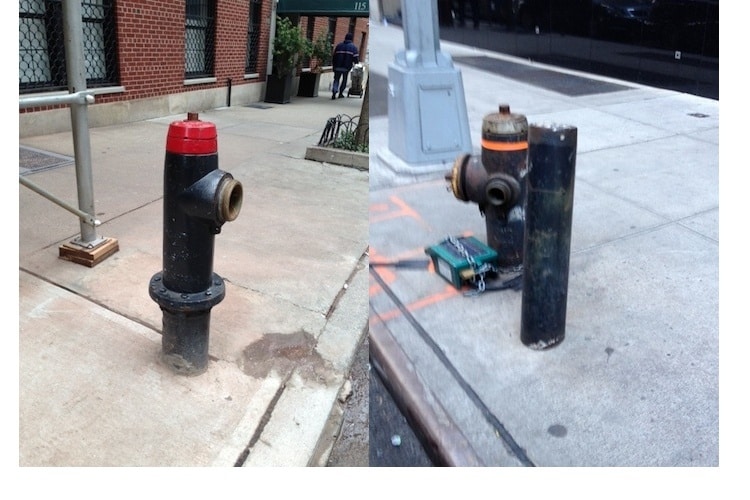 Will you be issued an NYC parking ticket for parking within 15 feet of these 2 fire hydrants?

I spoke with two wonderful members of the NYC driving community about receiving parking tickets for parking in front of two objects they claimed were not NYC fire hydrants. I asked them to send me pictures of the imposters, which are displayed above:

Back to the Future of NYC fire hydrants

“New York City’s current hydrant specification consists of two models of fire hydrants. The most common of these models is the design based on A.P. Smith’s 1902 ‘O’Brien’ hydrant [See, below left]. This model is also a common hydrant in many major cities throughout the United States.

The second model specified by the city is based on Dresser Industries’ “Traffic 500” model hydrant [See, below right].

One trademark of all the current NYC Spec hydrants is that they have one single hose nozzle (2.5″) and one single pumper (4.5″). Because these hydrants are no longer locked by patent laws, any manufacturer of that model receiving the city’s lowest bid may produce each model. These two makes of hydrants are located throughout the city (including Manhattan, Brooklyn, Queens, the Bronx, Staten Island, Hart Island, City Island, Roosevelt Island, Ward’s Island/Randall’s Island).

In specific areas throughout the city, hydrants not conforming to the current specification can be found, however.

In conclusion, I don’t think the two wonderful members of our NYC driving community have a reasonable chance of defeating their parking tickets for parking within 15 feet of a fire hydrant. I suggest a key takeaway here is if you see a pole busting through the sidewalk that resembles a fire hydrant (albeit with mix-and-match parts) treat it with the same respect you’d show any NYC fire hydrant. Even when a fire hydrant is not operational, it is still tough to beat a fire hydrant parking ticket.