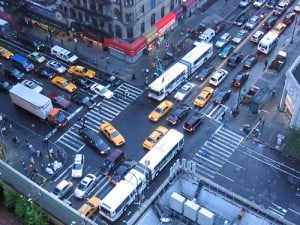 Yes, Aunt Tilly, there is a Blocking the Box Solution

Colonel Walter E. Kurtz in Apocalypse Now uttered these chilling words right before his death, “The horror…the horror.” Was he referring to the war, or the daily drama unfolding during rush hour at congested intersections across NYC; while parking ticket warriors enforce Code 9: Obstructing Traffic at an Intersection?

Manhattan Borough President, Scott M. Stringer, sponsored a study of the evils created by the driving public’s bad behavior of obstructing an intersection. They are:

Who among the driving public doesn’t agree that blocking the box causes these nasty problems?

Who among the driving public doesn’t agree that the first three recommendations were vigorously enacted and relentlessly executed?

Here’s a quote from the President’s Study:

“…We need a renewed education campaign to remind drivers to avoid blocking intersections, especially during television traffic newscasts in the morning and on the radio during peak driving times.  Drivers should also be made well aware of the penalties associated with block the box”