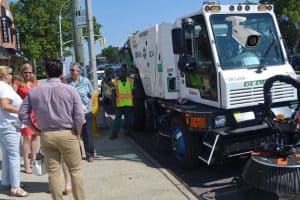 The Bloomberg administration is lobbying for a Bill in Albany that will allow NYC to mount cameras on street cleaners to take photographs of cars illegally parked on street cleaning days (reported by NY Times). NYC wants to enlist the aide of street sweepers to increase the number parking tickets, nab scofflaws and illegally parked cars. 10M parking tickets aren’t enough for our revenue raising wizard of a mayor.

You can’t make this stuff up.

” City officials said the cameras would allow sanitation and traffic enforcement officers — who currently patrol for cars parked illegally in the way of the 200 or so street sweepers that tidy up the city on weekdays — to focus their time elsewhere.

‘The city is constantly innovating to do more with less, and that’s what this bill is all about,’said Micah C. Lasher, the city’s director of state legislative affairs. ‘It will enhance our ability to clean the city streets and do so more efficiently.’ “

Under current practice, the enforcement officers who patrol for cars parked in violation of street-cleaning rules write out tickets — $65 for vehicles parked in Manhattan below 96th Street and $45 everywhere else.

“Under the city’s proposal, the fines would not change, and the street-cleaning routes where the high-tech street sweepers are to be used would be adorned with signage noting that the street in question is patrolled by camera-equipped sweepers.

Violators would receive a mailing containing the date, time and location of their vehicle’s street-sweeper encounter, and at least one photograph snapped by the street sweeper’s onboard camera. City officials said they did not expect that camera enforcement would generate additional revenue for the city from parking fines.”

According to an NYC spokesperson, cameras will not increase parking ticket revenues. Yea right, and I have a bridge to sell you.

This is not about cleaner streets. It’s about, “show me the money!”

Be aware. All “neighborhood double parking on the unrestricted side of the street during street cleaning deals” are toast. Your car will be a star of the Bloomberg revenue raising production company.

Fortunately for the driving public, there is not a big or even medium size push by Albany to get this Bill passed. But, do not sell His Honor short. He got his bus lane cameras, and now he’s fighting for sweeper cams.

Read the entire article from the NY Times